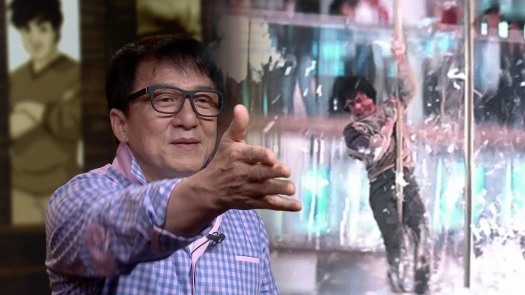 The climax of Police Story. Jackie Chan realizes there’s only one way to stop the bad guy, so he jumps off a balcony and slides down a pole to the ground floor of a shopping mall. My wife cheers in amazement. The movie replays the moment two more times, anticipating there is only one way a lowly human could react to that death-defying stunt.

Chan performs the stunt himself. It leaves his hands shredded by broken bulbs. He is used to pain. A hyperactive kid, he was sent to the China Drama Academy, and trained for Beijing Opera from 5am to 11pm every single day. Such cruel discipline created one of the great action stars. Movies today can hardly compare. Digital effects have created a  bigger chasm between life and screen than ever before. The sight of Jackie’s real stunts – magnified by the outtakes of failed attempts in the credits – has a particular effect. The beauty of ballet and the exhilaration of a perfect dismount all at once.

Except for maniacs like Tom Cruise, you can’t make ’em like this anymore (labor laws, for one.) Police Story is the product of intense, inhuman physical work and a film industry scrappy enough to indulge a man who saw the world as a giant jungle gym. A time capsule. If this isn’t Cultural World Heritage, then what is?