Gladiator (directed by Ridley Scott)
A good friend of mine once told me that she loved Gladiator because it had all the elements of a great movie. A comment I disagreed with at the time, but has become baffling now that I’ve revisited the movie. If Gladiator has all the elements of a good movie, then I must have horrible taste. I personally love comedy and romance, of which Ridley Scott’s epic of Roman revenge has practically none -its biggest romance being the one between a man and his dead wife. Gladiator has many elements -at a two and a half hour running time how could it not?- but there isn’t much variety to them. This is understandable, since the movie is indebted to a very specific genre tradition. Gladiator does, however, have a variety of tones.

The biggest fight is one of tonal sensibility between classic sword-and-sandal epics, and the hyperactive energies of nineties blockbuster cinema. Gladiator finds multiple tones in the tradition of its genre, and it doesn’t hesitate to borrow from any of them. Half of the movie is rooted in the stagey political drama of your prestige classics like Ben-Hur and Qui Vadis? The other half relishes in melodramatic storytelling and the exaggerated violence of B-level gladiatorial pictures. At the center, you have Russell Crowe as Maximus, the general-turned-slave that decries the violence he imparts in name of his vengeance, and around which the movie builds the pillars of its spectacle. This double standard is not earned by Scott’s half-measured approach, which is ashamed of how much it loves the violence it chooses to admonish.

It’s from prestige action movies of the nineties like Braveheart and Saving Private Ryan that Gladiator picks up its action cues, which were chosen, I must assume, based entirely on hype. The fractured impressionism used to convey the chaos of the Normandy landing makes no sense for this movie’s purposes. It doesn’t serve the geography of the Colosseum, a structure explicitly designed to provide an audience with an unobstructed view of the action. And it serves no purpose in supporting the claim that protagonist Maximus is a great general, based on the fact that thanks to the chaotic editing, we cannot make sense of any of his strategies.

Gladiator temporarily revitalized the sword-and-sandal genre, and it was a massive enough hit to win five Academy Awards including Best Picture, so there must be something that peopler -my dear friend included- must have found in it. If you ask me, the best thing Gladiator has to offer is the performance at its center, which is a reminder of why Russell Crowe became a big star in the first place. In broader terms, this is a typical Ridley Scott movie. A handsome looking movie with the highest production values (I particularly like the saturation in the color palette), that has very little interest in what lies beneath its million dollar exterior.
Grade: 5 out of 10 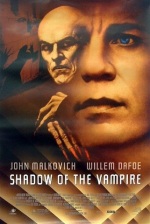 One gets the impression that Mehrhige is not at all interested in Murnau, who is rendered as an obsessive realist who seems incapable of making movies as expressionistic and visually suggestive as Faust, Sunrise, and Nosferatu. And this is just the beginning of the movie’s cheapness of spirit, which culminates in the failure to recognize that, if Schreck, being the vampire that he is, can’t cast a reflection, then there is no possible way his image could have been captured by a movie camera.

It is truly a shame that Steven Katz’s screenplay is unable to build towards any kind of momentum, and even sadder that Mehrhige’s eye for cinematic visuals pales in comparison to Murnau’s originals. (Admittedly, Mehrhige made himself an enormous disservice inviting comparisons to Murnau, but outside a couple direct references to Nosferatu, the guy doesn’t even seem to try).

If there is a reason to watch this movie is Willem Dafoe’s performance as Schreck, which is completely unhinged and unrestrained. That a performance this unmeasured managed to be nominated for an Oscar is somewhat of a surprise, but if you are the kind of person who would love to see Dafoe -to put in terms coined by the great David Sims- serve slice after slice of sweet honey-baked ham, then you might want to give this one a look.
Grade: 5 out of 10