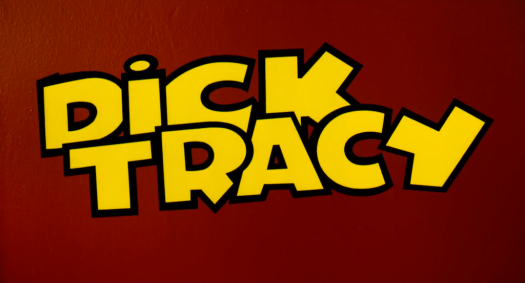 Hit Me With Your Best Shot is back, and to kick off the second half of this year’s season, our friend Nathaniel has chosen to celebrate the 25th Anniversary of Warren Beatty’s Dick Tracy, a movie whose reputation I have never quite figured out.

It opened big upon its original release, but it couldn’t rise to the financial challenge, or escape from the critical shadow of the previous year’s Batman, which is quite similar as far as high stylized, semi-serious comic book adaptation are concerned. The critical consensus seems to have deemed it underwhelming, but lots of people who were young filmgoers have grown up to praise the movie, especially as far as its aesthetics are concerned. I can’t argue with that part. Dick Tracy is a mighty fine looking movie, but its flaws are still too big for me to love it.

But I like to take these “Best Shot” assignments as a way of praising movies, and visual storytelling in particular. So while Dick Tracy is often a very dull movie -there are too many characters, the plot is hard to follow- it is a very entertaining movie to look at, and there are quite a few extraordinary elements in it. Particularly, any conversation of the movie’s successes must begin with Beatty’s decision to try to replicate the world of comic strips on the big screen.

One of the results of this decision is the grotesque makeup of the movie’s villains (which are lifted from Chester Gould’s original strip) and the first -and best- of Al Pacino’s big and unbound performances as gangster Big Boy Caprice. Following on the side of successes we have the design of the world, where film noir, gangster films, and pop art meet each other in bizarrely colorful terrain. All these elements point towards a self-aware, witty, and comedic take on the material, which is sadly not the case.

I don’t know how much Dick Tracy was intentionally trying to piggy-back on the success of Batman, but the similarities are obvious. There is, for example, the similarities in the movies’ scores, both written by Danny Elfman, and the gothic and serious tone of the movie, which feels too much like Batman ’89 when it would’ve been better off (I think) skewing closer to Batman ’66. Al Pacino is the best part of the movie because he is the one performer allowed to give in to the movie’s more cartoonish aspects.

That being said, there are some pretty great moments of visual cleverness in Dick Tracy, the very best of which is my pick for “Best Shot”. It’s going to be a little difficult to convey the shot with just screen-caps, since its effect relies quite a bit on movement, but it’s far and away my favorite shot in the movie, so I’ll try as hard as I can. It comes very early on in the movie, when Dick Tracy follows a homeless boy into the shack of a lowlife and proceeds to beat the hell out of the criminal. While they fight, Beatty cuts to a wide shot. You can see the affluent city in the background, while in the foreground, the criminal’s raggedy shack is shaken from one side to another by what’s going on inside it. A clever moment ruled by the kind of cartoon logic Dick Tracy could’ve used more of. 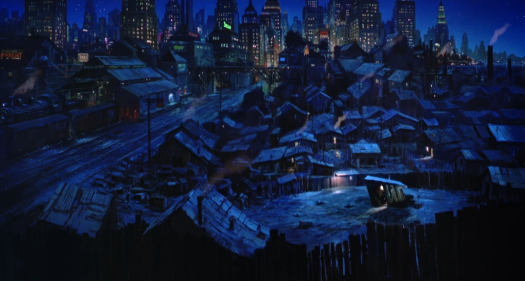