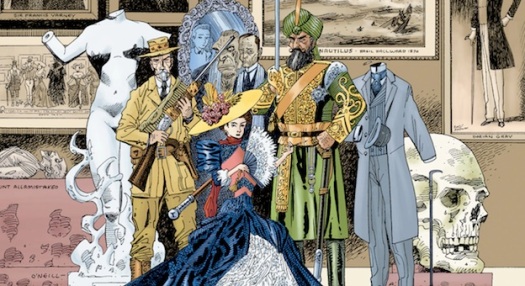 This is kind of a silly thing, but the kind of writing that belongs on the internet, so… This was inspired by the awesome film critic Tim Brayton, who made a comment on one of his latest columns over at The Film Experience, in which he mentioned something about the idea of a more modern version of The League of Extraordinary Gentlemen. Now, I’m a big fan of Alan Moore and of the League of Extraordinary Gentlemen series -not so much of the stupid movie starring Sean Connery- so I couldn’t stop thinking about what the League would look like if their adventures took place one hundred years later, at the turn of the twentieth century. Here’s the members I came up with:

Agent Dana Scully
Now, fans of the series will know about the funny artwork by Davinder Brar depicting a 1996 League of Extraordinary Gentlepersons. It is pretty cool, but also just for laughs. What I wondered about when making up my list of League Members was what pieces of pop culture from the late 90s and early 00s people will remember a hundred years from now. Of the properties depicted in Brar’s piece, I think The X Files will not only definitely be remembered, but is also a natural fit with the kind of paranormal mission the League gets into. The question then was, of course, who would make a better League Member, Mulder or Scully? I went with Scully not just because I think Gillian Anderson’s performance on the show is just fantastic (don’t get me wrong, Duchovny’s also great, but Anderson is better), but because of Scully’s skepticism. If you are a fan of comic books, or movies, or television, basically if you’ve been alive the past few decades, you know there’s always the skeptic character. Scully happens to be one of the best ones ever.

Hermione Granger
Another big question for me when coming up with my League was how many British characters to put in. The original League is very British, but it is also set in at the time when Britannia ruled the seas. The late 20th Century undoubtedly belongs to America, but I felt like I still had to tip the scale towards British characters. Now, the biggest piece of pop culture to come of the United Kingdom in the past few years has to be the Harry Potter series, but following the way Moore tended to avoid the really huge characters in literature, Harry himself was out of the question. Also, Harry is kind of a terribly dull character. Hermione, on the other hand, is much more fun, and would be such a better recruit for the League considering her enthusiasm for knowledge and her ability to quickly come up with plans that involve using the Polyjuice potion.

Spike
Following the big character rule, I couldn’t cast Buffy, but I had to pick someone from that show. Since I already had Hermione, Willow would be redundant. And Xander, well, I had someone other in mind to fill up his role. So the obvious answer was Spike. Vampires were already present in the first League, plus, Spike is awesome and he is sort of a shady character considering his villainous past. Being someone you can’t always trust, he would bring the kind of tention Hyde and Griffin brought to the team in the comic books.

Shaun
There are two guys who pretty much own all the nerd/geek cred right now, if you ask me. And they are Joss Whedon and Edgar Wright. Whedon’s creation are already represented in Spike, so in terms of Wright I went with Shaun. The question is, of course, why would the League recruit just a regular English dude, except for the fact that he is pretty successful at fighting the Zombie apocalypse. But, hey, he can work as the fish out of water character. Maybe I should’ve gone with another Simon Pegg character? I mean, Nicholas Angel is a policeman, and Gary King seems to be a pretty good fighter, but Shaun’s just my favorite.

The Tenth Doctor
Now, this is where it got tricky. I am very unfamiliar with Doctor Who beyond having seen a couple episodes here and there. I know the Doctor is kind of a big deal, so at first I thought he might be too big a character to put in the League. But from what I understand, there have been many doctors, and not in a James Bond kind of way, where they are supposed to be the same person, but they are different guys who could interact with each other. As you might have guessed, all of this knowledge comes from those Day of the Doctor commercials, so I understand I could be totally wrong about this, and if I am, please correct me in the comments, but following the my knowledge, one of the Doctors could very well be part of the League and he is the kind of beloved British character that would fit. My pick out of the Doctors would be 10, played by David Tennant, because he’s the one in the episodes I’ve seen, and he is a pretty cool actor.

Other characters I considered for the League were Hannibal Lecter, Sarah Connor, Donnie Darko, Dr. Alan Grant (from Jurassic Park) and Bryan Mills, who in case you don’t know, is the name of the character played by Liam Neeson in Taken. Hope you liked this, if you have any ideas of your own, sound off in the comments.